What is the Truth about the Lydenburg Heads ?

By
Dr. Cyril A. Hromník

On November 4, 2004, the UCT Chancellor Mrs. Graça Machel awarded a trophy of a metalic head to President Mbeki for his “Outstanding Leadership in Africa,” and in special recognition of his handling of the explosive HIV/Aids pandemic. Most newspapers have reported that the recipient failed totally on this score, which would make this award rather hollow. President Mbeki however appears very happy in the picture, which shows him receiving the hollow head award from the hands of SRC president Nqobizitha Mlilo. (Cape Times 5 Nov. 2004, p. 3). But, did he know what he was receiving? Not at all! He had no idea what this ‘head’ was all about.

All awards and trophies, whether in sport or politics, are designed to convey certain meaning related to the recognized and acknowledged achievement and are justified by a precedent or a certain history of their own. Thus the Nobel Prize refers to the Swedish discoverer of dynamite Alfred B. Nobel (1833-96), etc.

In this case, the award consists of a rather ugly and poorly sculpted head mounted on a wooden box bearing an inscription. The official blurb, prepared for this occasion presumably by the UCT experts in this field i.e. the Department of Archaeology, and published in the UCT Monday Paper, informed the award givers and its receiver that this head was, on the one hand, “a bronze casting of a Lydenburg head” (being “the wax copy of the head modelled by UCT alumnus and sculptor David Brown”) and, on the other hand, “a brass replica of a Lydenburg head.” (UCT website www.uct.ac.za). This description leaves me, and should have left the readers as well as the recipient himself wondering whether the piece is a bronze sculpture imitation of the original terracotta hollow head or a true replica cast in brass.

One can only speculate why the glaring discrepancy does not seem to bother either the makers, givers and the recipient nor the reporters, even though this award giving was an historical event without precedent and it involved the highest-ranking person of this nation, the President of this country himself. The most likely explanation is that neither of them actually knows what was the origin and what is the meaning of this rather imprecisely “modeled” and equally unsightly metallic head.

The confusion is further heightened in the website’s explanatory box where the same ugly head is described as the “highest honor” received by Prof. Daya Reddy as “The Order of Mapungubwe (Bronze) from President Thabo Mbeki.” Just to straighten up the geography and the subject of the awards: Mapungubwe is located in the Limpopo Province 412 km ENE of Pretoria and The Order of Mapungubwe is represented by a one-horned Indian rhinoceros worked in gold with a typically Indian craftsmanship and found on the Mapungubwe Hill by E.S.J. van Gran’s party on 1 January 1933. Lydenburg, where the original of the hollow head awarded to President Mbeki was found by Karl von Bezing in 1956 or 1957, is situated in Mpumalanga 238 km ENE from Pretoria. 341 km separate the two locations and one would like to think that not even a blind person could confuse the Indian golden rhino from Mapungubwe with the ugly and hollow clay head from Lydenburg. The archaeology experts at UCT, who must have been involved in the design of the two awards, managed to confuse the two exposing thus South Africa and its President to public ridicule. Unfortunately, the glaring ignorance and confusion of history does not end here. 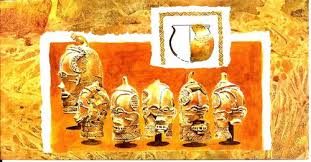 The original Lydenburg head (one of seven) is said to have been carbon dated “at between AD500 and AD800.” In reality, the carbon used in this pseudo-dating was excavated from a 650 mm deep pit in a donga while the clay heads were found on a heap on a flat, uneroded and gently sloping surface at a considerable distance from the pit. This discrepancy does not prevent the UCT experts from claiming that “the Lydenburg heads are the earliest known forms of African sculpture in southern Africa” and that “they testify to a complex aesthetic sensibility among the early agricultural communities in Southern Africa.” No such testimony can be derived from this misdated and misinterpreted ugly clay head because we have no evidence whatsoever of the so-called “African” (meaning black, Bantu-speaking) population inhabiting the Mašišing area at that early date.

The heads from Mašišing, as they properly should be called, date no further back in time than to the middle of the 19th century, when a band of the Tsonga-speaking MaGwamba known to the Sotho as MaGwampa was brought to the head-site area in Mašišing by their white chief Juwawa. They sojourned there temporarily between 1834 and 1846. The MaGwamba had a peculiar custom of tattooing their noses (also cheeks and breasts in the case of women) with lines of pea-sized knobs produced by pulling up the skin cut by razor with a little iron hook and by applying to the wound ochre, ash and a certain medicine. The resulting bluish knobs (keloids) on their noses, called in Chopi tsindova or magwava, earned them the name MaGoa-pha, meaning ‘Scarred MaGoa’ (where MaGoa refers to their mixed, Indo-Tsonga origin), pronounced MaGwampa or MaGwamba, and rendered in Dutch as Knobneusen and in English as Knobnosed. Their way and patterns of body decoration were unique, just as the clay heads with similar decorations are unique. Neither the decorative patterns nor the thus decorated clay heads have ever been discovered anywhere else in the whole of Africa. Clearly, the heads were produced by the MaGwamba potters for or on orders from their white chief, the Italo-Portuguese trader-adventurer, Joâo Albasini, nicknamed Juwawa. (Details of this evidence have been published in the Summer 2003 issue of DeKat)

These heads are ‘hollow’ as far as the pre 19th century history of South Africa is concerned and the award represented by one of them is equally hollow. For nobody seems to know any history connected with these heads. The manipulative handling of their origin and attribution is typical of today’s academic disregard for the norms of objectivity in the treatment of Africa’s historical heritage, and neither the maker or giver, nor the receiver of the award is able to recognise the deceit of which they are the victims. The deliberate corruption of African history in the name of the misguided political correctness, which we are here witnessing, can only bring disgrace and ridicule upon South Africa. “Replicas of this head will be awarded to recipients of the UCT Chancellor’s Award for Outstanding Leadership in Africa,” says the official blurb, and there can be no doubt that in time this award will become known as ‘The Hollow Head Award’.

This entry was posted in History. Bookmark the permalink.