Terrorist groups profiting from the poaching trade in Africa Parts of Africa are facing an unprecedented threat from illegal poaching, with criminal organizations and terrorist groups seeking to profit from the growing demand for products such as ivory and rhino horn. There is evidence that terrorist organizations such as al-Shabaab are now heavily involved in the illegal wildlife trade, converting poached products into cash which will purchase weapons and fund terror campaigns across the continent. Overseas demand and the growing Asian economies have established a wealthy consumer base, keen to purchase rhino horn powder which currently has a higher market value per pound than gold or cocaine. Ivory is also much sought after with the Elephant Action League (EAL) labelling it “The White Gold of Jihad”. The EAL suggests that as much as 40% of funding for al-Shabaab comes from trade in ivory and rhino horn and so the onus is on governments to tackle the problem as much from a security perspective as one of conservation. The illegal trade prospers in areas where there is weak law enforcement and corruption, and even more so where police and customs officers are lacking in the training and resources to effectively combat the often sophisticated poaching operations. Al-Shabaab attacks continue. The spotlight on al-Shabaab has intensified since the recent bombing of the Westgate Mall in Nairobi, in which at least 67 died and many more were left with serious injuries. The group has since struck in Somalia with a suicide attack on 19 October killing at least 13 and injuring ten others at a restaurant in the city of Beledweyne. The explosion took place near to a military base in the city which is under government control and patrolled by peacemakers from the African Union. The al-Shabaab group has shown itself capable of hitting a range of targets including political targets, military forces and recreational spaces popular with foreigners. To do this, a steady stream of funding is required and this is where the profits from poaching are increasingly central to al-Shabaab operations. In countries such as Sierre Leone and Senegal, a combination of al-Shabaab and other criminal and terrorist organizations is driving some wild animals to the point of extinction. Over 30 000 elephants were slaughtered by poachers across Africa last year and in Kenya, the elephant population has decreased from 167 000 to 35 000 in the last 30 years. Paul Kahumbu, executive director at Wildlife Direct said: 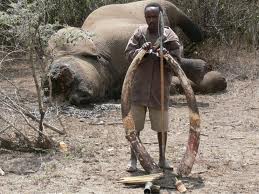 Poacher Caught in the Act of Poaching Elephant

“The ivory trade is just the same as the previous [blood] diamond crisis in West Africa.” How the poachers work Many groups involved in poaching are well-resourced and well-organised. They appear to be able to easily slip past the rangers who are in place to protect rhinos and elephants, and are armed with powerful weapons such as AK-47 assault rifles. In many areas law enforcement officials turn a blind eye or are paid off, and even poachers who are caught often receive minimal sentences. A lucrative business. The mathematics of the ivory trade make it an attractive proposition for al-Shabaab. Ian Saunders, director of the Tsavo Trust, gave testimony to the US Congress last year and stated that the ivory from the slaying of one elephant would have been enough to fund the 1998 attack in Nairobi and that the current wholesale price of ivory could comfortably fund a number of further operations in East Africa. A number of ports in Somalia are still under the control of al-Shabaab and this along with the porous border that it shares with Kenya means that it is relatively easily to smuggle contraband out of the organization’s base. The ports of Mombasa in Kenya and Dar es Salaam in Tanzania are also used regularly to export ivory as officials are simply unable to stem the flow of the illicit material because of manpower shortages. For many people, the illicit trade in rhino horns and ivory remains primarily a conservation issue and protecting these animals from extinction is still a concern for governments and non-governmental organizations. However, the growing understanding of the links between poaching and terrorism is slowly bringing about a change in focus on this issue.

Gleaned from an article and website suggested by Jan Lynzaad

This entry was posted in Nature. Bookmark the permalink.